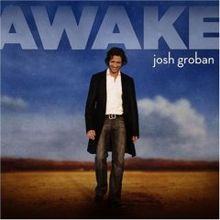 Awake is the third studio album by American singer-songwriter Josh Groban. Announced on September 13, 2006, it is his third studio album, and a follow-up to his multi-platinum album Closer. Awake was released on November 7, 2006.

The album was certified 2x platinum in the US by the RIAA for shipping two million copies, and is the third top selling classical album of the 2000s in the US, according to Nielsen SoundScan.